War for the Crown 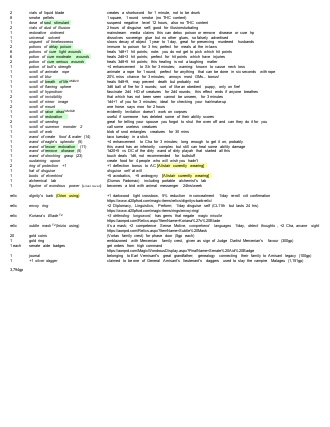 Before starting my own, i read jounals from all across the lands, the most famous from magnimar always caught attention with something, i wanted to try it out.

Oh radiant watcher over allllll, this lowely lucent repooorts.
Ya i can see how that gets annoying after a time.

Upon the paper script
an invitation is writ

the task given by lady martella
to attend the royal gala

five invited in total earnest
with a guest by our illusionist

he a small furry creature indeed
her gown designed to mislead

never to miss a celebration
the hefty eat with most acceleration

Those who can't catch there breath
spoke the aristocrat to death

With a quip and a spell
in a lulliby they fell

But will we let this ruin our day
To that i say NEEEIIIGGGGHHH!

Acrostic of the Vote

The lords and ladies have been wined
Ribs for dinner and rhubarb for after
All is ready for the vote
Perhaps calmness should have been the sign
Past experience knew it better
Every vote is counted
Destruction of old laws is agreed
In with the matriarchy, out with the patriarchy
No one, except for everyone expected the rest
A prince is present with a tone not so princley
Great care was taken to murder us all
Rewards paid to men with arms willing to kill
All must die screams the insane prince
Victory wil be his despite the vote
Everyone clammers to protect the princess
With a stab wound from the prince
In pain the new lord kalbio falls
To his rescue the heros go
Healing him enough not to die
Then teleported poof and dark
How to solve this graves riddle
Escape was made but met with nobles
Defaulted to caretakers of the weak and rich
Exploration of these crypts is handled
Armors are here to kill, and denied until now
Desperate calls from up top, the king is winning

Every room we enter
entrails find themselves everywhere.
endangered animals are egregiously executed
while earmarked ebooks are easily erraticated
ebullient ecclesial globe eccentricly assists us
educationless eavdropping egotistic gremlin
with no elegance elicites our earnings and elaborates on his employer
the emptiest shop enabling expensive exploits is encouraged to emigrate
to emphasis effective exchanges
elsewhere we embattle with echos eminating eerily from an endless long eared eejit
effusing earfuls of edicts effortlessly

Each green hedge marks our pacing. Gazing at the well kept yard, shadowed by its constructed lord, a building to be its masters herald. Darkness grows on its walls, a sickly green gives it away. Blood red pedals mar it, shutters working desperatly to push against the sick and dark.

At the end of the driveway another construction, the master, Bardlebi Lotheed. His stance straight as the planks that built the herald. His smile, his greetings as thin as the wallpaper that dress his halls. Like the beautiful chandeliers that decorate a house, he makes sure to shin a light when we arrive, but lets the shadowed parts of his construction creek and moan. A reminder that he is held above our heads, ready to crush us.

When a sickness flows through a country you can feel its ephemeral weight. People hunch, hide, are hindered. They suffer, seeping sweat, sore. In these times it is those small lights, hopes, niceities and enterainment that pass through like guests. These guests brighten the sickeness they deny.

Guests seek the same as all, comfort in a hope for the future, like a mother working desperatly to make a safe roof for her daughter. A roof that does not creek or moan. Missing only that even the best made houses fall to time. Winds bat at it, bending it. Water eats at it. A house can crumble, but a builder must maintain. It is not enough to make a house, but to make a builder. A lesson, from a guest to resist the sickness.

Some guests go unnoticed, it does not give off light, but hunts the sickness, works to drive it out. It over heats the country, hoping to boil the sickeness. At the right moment, it launches it's attack, hopeful it hits its mark. Sometimes only to strike a guest.

A sickness grows, constructed long ago to be good, but has no builder to maintain. Its master coughs, spreading to the guests, their minds confused, drawn to the darkness. They play games of vile.

Is this lord to rotten to maintained? Can the white of the walls be restored? Can years of growth, mared shapes and discoloration be cleaned?

Only a cow knows.

one day, in the queens old land
a few came up to plan and brand
Lies deceit and words like swords
stabbed through court with just some gourds

At the head, a man of sin
torture and theft, gave him a grin
scraps of food from his full plate
were all they got to eat to date

A hunt is on, but not for cow
but a man who will be made to bow
a ser-vant, so loyal and brave
was put to dirt but not his grave

#7 - The Inside Job
To demoralize and devastate your enemies, specially construct a series of classic wizard towers then spread rumours that items your foes desire are within.  An illusion should be used to mask that the construction is done out of wood but giving the appearance of traditional stone.  Complicated spiral staircases should make travel within slow and arduous.  Once your foes have made their way from the sole entrances at the base to the rumoured loot at the top, a divination spell should alert that phase two of the trap is ready to be sprung.  A pair of dominated hippogriphs (ideally from Korvosa's Sable Company) should be compelled to fly their unwitting riders directly into the side of the towers.  Small fire elementals previously hidden within the towers, trapped in ice tomb hexes will now be broken free, setting the towers ablaze.  While your foes struggle to escape their smoky, burning doom, the structure of the towers burn and collapse, crumbling around them, plunging them to certain death.

#6 - Automated Alarm
Obtain a grey parrot and place it in a cage somewhat near to a door you wish to be alerted to the tampering with.  Teach the parrot phrases of your choice, associating them with stressful situations.  This may require some patience.  Care should be taken to not harm the parrot but merely threaten it.  Place a platform to the side of the cage.  Suspend a curtain between the platform and the cage and run the rope holding this curtain back to the door being protected.  Rig a trip-wire to cause the rope to be severed if the door is opened without detaching the wire first.  Finally, have a skilled person cast a permanent illusion on top of the platform, in the form of something dangerous such as a burning flame, identical-appearing parrot, or lunging alligator.  Do not forget to feed the parrot.

#5 - Ball of Frustration
Craft a hollow wooden sphere in halves.  Use a rubber strap on the inside to keep the  two halves pulled together to complete the sphere, but allowing them to be separated with effort, allowing access to the inside.  Carve holes in it in various shapes such as stars, circles, squares, and ovals.  Cut a series of polished stones matching the shape and sizes of each of the holes.  The clear intention is that the stones can be pushed through the holes into the sphere, giving the appearance of a simple shape-matching puzzle.  Make one - and only one - of the stones slightly too large or misshapen to fit in its corresponding hole.  Ideally have several similar-shaped holes but ensure this one stone cannot be inserted through any of the holes.  This trap is sure to have a long-term impact on the mental well-being of any child to whom it is given.  Likely outcomes include obsessive-compulsive disorder, insanity, and career paths as a barbarian.

#4 - Eye Spy With My Bleeding Eye
Have a wood-worker carve a long, hollow tube the length of a broom-handle.  Insert a high-tension spring and affix the open end of the tube to the inside of a door that needs to be made intruder-proof.  Drill a hole through the door at the point that the tube meets the door.  Drill a small hole in the tube.  Insert a long spear-like weapon, blunt-end first, using padded gloves to avoid being harmed by the spear.  Place a pin through the hole in the tube to hold the projectile in place and run a trigger wire to the handle of the door such that opening it will release the pin.  Finally, cover the hole on the outside of the door with a false peep-hole lens, hiding it from detection.  For extra verisimilitude and inclusion, repeat the process at varying heights on the door, providing apparent peep-holes for humans, gnomes, and politicians - in descending social stature and moral value.

#3 - The Dainty Dagger-Dispensing Door
Enlist the service of any available fairy armies and trade for their backup melee weapons.  Note: a frugal trap-designer can extract the greatest value of daggers from fairies by offering payment in pizza.  Conceal these tiny knives in the ceiling above the door that is to be secured, affixing them to the bottom of large bricks of stone and surrounding them with concealing dust and webs.  Run a wire from the door's handle mechanism over a set of pulleys in the ceiling to the top of the blocks of stone, suspending them in place.  Finally, construct a bladed attachment that severs the wire if the latch is opened without pulling it outwards first.  An unsuspecting intruder attempting to open the door will cause the daggers to be driven into their skull, propelled by the weight of the blocks of stone they are attached to and inflicting death by a thousand cuts.  As a secondary benefit, the bricks are likely to also crush the intruder.

#2 - The Baffling Door
Place false hinges and handles as well as an obvious but non-functional latch on the outside of a door that opens outwards.  Unsuspecting or uninformed intruders will naturally become irrationally frustrated by repeatedly pulling the door.  Madness is guaranteed.  Authorized individuals will be informed that a hidden release nearby activates a cantilevered mechanism that retracts locking pins from the door, allowing it to be easily pushed open.  A more deadly version can be created by adding labels on the door with the word "pull" in multiple languages.

#1 - The Electrified Drawer
Transfer stored lightning into a glass bottle.  Conceal a small pulley within a desk or cabinet.  Suspend the glass bottle with a thin rope, positioned high within the cabinet or desk.  Provide sufficient rope for the bottle to be lowered, and loop the spare rope around an inside nail and drill a small hole near it to the outside.  Use copper wire as a conductive conduit between the bottle and the pull handle on a drawer.  Since lightning pours downhill, anyone contacting the handle will cause the stored power to flow into their body.  Safe access can be gained by using a hook tool to snag the spare rope, pull it through the hole to the outside, unloop it from the interior nail, and lower the bottle below the drawer.  Note: If magic is available, an option to capture the moment of the intruder's doom and display it afterwards may provide hours of entertainment.